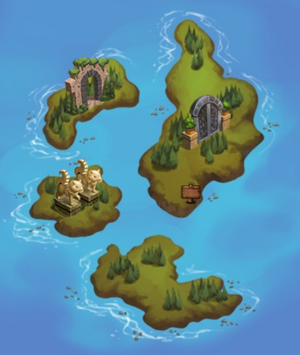 The player is initially sent to this series of island dungeons by the quests Rumors of ghosts and An ancestor's benediction. Both quests involve traveling between the three dungeons, sometimes more than once. An NPC questgiver, the bust of Archibald Landel, resides in Beryl Park behind a door whose key is obtained in Acacia Park., making this the most logical first goal. Pick up all Proofs of the intangible on the way. An efficient sequence is listed below.

Travel is via the Little Abandoned Dock.

On Completion of the quest Rumors of ghosts but before quest turn-in: The option to travel to the Landel Islands from Craneharbor is removed until you turn in the quest, and then the trip back to the islands is 5

Retrieved from "https://therian-saga.fandom.com/wiki/Landel_Islands?oldid=21244"
Community content is available under CC-BY-SA unless otherwise noted.